Dentistry has been around for centuries! However, some of the tools and practices used to clean teeth back then are not what we’d recommend as effective dentistry!

Back in Europe in the Middle Ages, the wealthy used to use sweet-smelling wood to clean their teeth!
Most Americans didn’t brush their teeth until Soldiers brought the practice home from Europe after WWII.

Ancient Egyptians, Chinese, Greeks, and Romans all describe different mixtures used for cleaning the teeth. Some were tastier like fruit and honey, while other concoctions sound less appetizing like lizard livers!
Fluoride was only added into toothpaste in 1956.

There are mentions of using toothpicks as early as 3500 BC. The Babylonians used toothpicks to removed food particles from between the teeth similar to flossing!

An Egyptian doctor known as Hesi-Re is the earliest known dentist. Hesi-Re was alive around 3000 BC.
From the 5th-15th century AD, instead of dentists, there were “Barber-Surgeons” who performed all sorts of services from cutting hair to pulling out teeth!

Human teeth were once used as dentures! Poor people would pull their own teeth out so they could sell them!

When false teeth were placed in the mouth hundreds of years ago, they were kept in place by tying them to surrounding teeth.

President George Washington, the first President of the United States, had dentures made out of Metal and carved ivory!

People have been filling cavities for centuries! There are accounts of skeletons found from thousands of years ago with fillings of resins, beeswax, or linen!

People all over the world once believe cavities were the result of “Tooth Worms”! Little worms that burrowed holes in your teeth (not true, by the way)! 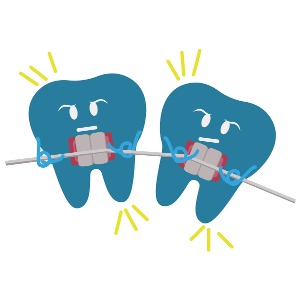